OLED (organic light-emitting diode) might be coming to Apple’s MacBook and iPad displays. The technology is certainly not new to the company, but would be new to its larger device lineup. Apple currently offers OLED displays for its line of smartphones. iPhone X, XS, and XS Max comes with Apple OLED display technology.

The switch to OLED displays is seen as a natural progression towards improving its MacBook and iPad lineup. However, there were no plans of Apple offering it on any of its bigger devices. With Apple continuing it’s conquest to make it’s products smaller and smaller, OLED technology seems like the smart move.

Apple iPhone sales have been declining recently which may have prompted the switch to OLED. The introduction of OLED technology began with the iPhone lineup. Apple entering into an agreement with Samsung, the world’s largest OLED manufacturer. According to a financial report, Samsung Display’s earnings saw a sharp drop from $4.9 billion in 2017, to $2.3 billion in 2018. This was primarily due to a 50% cut in production. Samsung Display is now seeking a penalty fee for unfilled contracts, including those from Apple.

Samsung Display’s announcement said that Apple was not meeting its minimum order requirements and should pay a fee for this contract violation. In response to this, Apple is offering a compromise where it says it will be ordering additional OLED panels for other Apple products, which might include MacBook and iPads. 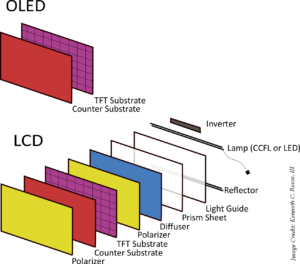 What is the difference between OLED and LED?

Apple’s flagship smartphones, such as the iPhone X and iPhone XS use the latest OLED technology. But why? Simple, it gives them a better displays, but also enables these high-end phones to have a slimmer profile and better battery life. This is possible because OLED does not use backlights and require less power. With Apple continuing to make it’s Macbooks smaller the conversion to OLED is a no-brainer.

The Good and the Bad

The future certainly looks bright for MacBook and iPad users. Not only because OLED displays look better but because this technology makes many things possible. With Apple OLED display technology, expect your MacBook to be lighter, have better battery life, and have an even slimmer profile. The bad news? There’s a simple reason why OLED displays are only available on its premium line of smartphones, they make production more expensive. Don’t expect MacBook and iPad prices to come down anywhere in the foreseeable future. Who knows, perhaps we’ll see OLED technology on the long awaited 16-inch Macbook Pro. Fingers crossed.